On Friday, October 14th, families of vaccine injured children, and those concerned with vaccine safety, gathered outside the CDC in Atlanta to protest. Families were also there to express their distress at the new draconian rules being proposed by the CDC that will give them the power to detain, and coerce medical treatment for, anyone they suspect is ill or could become ill. The agency has failed to respond to more than a decade of charges of fraud and abuse of power in the epidemic of vaccine injuries being reported.

Protesters reported that CDC employees walking through the protest said to the parents:

“Get out of my way, stupid idiots. Some people have real jobs.”

And another CDC employee responding to a chant of “stop killing our babies,” said, “Your babies keep us employed.” (video of the report here.)

Finally this man responded to a woman holding a sign and trying to talk to him about her son’s MMR induced stroke with the following gesture: 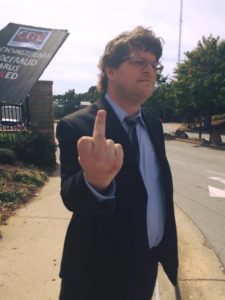 The response of some of the employees speaks to the culture of the agency and their true attitudes toward those reporting vaccine injury.

The CDC has been contacted in order to confirm the identity of their employee, and to respond to the reports by parents.  This aricle will be updated to reflect the response of the agency.

CDC has responded, failed to identify their employee, and regarding the matter, simply said, “CDC respects everyone’s rights to express their opinion safely.”